In anticipation of my second reading of the 1890 novel, Hunger by the Norwegian author and Nobel Prize winner, Knut Hamsun, I have searched Twitter to see what readers and fans say about him and his seminal work. I selected some tweets and made a few comments.

But why choose to re-read Hamsun?  It’s hard to forget a writer who created an intense character who is still likeable in a dark, beautiful way. And since two years has passed when I first read Hunger, I thought it’s time to revisit an old friend.

Hamsun also influenced a long list of writers, not least, the German author, Franz Kafka, who wrote about a man turning into a bug in The Metamorphosis. That’s a big deal. Hamsun’s writing style, which was described as modern (think John Grisham), has paved the way for the development of modern fiction. In short, he’s the Robert Redford of contemporary literature, intellectual and influential.

Now to the tweets.

Let’s start with some humor. 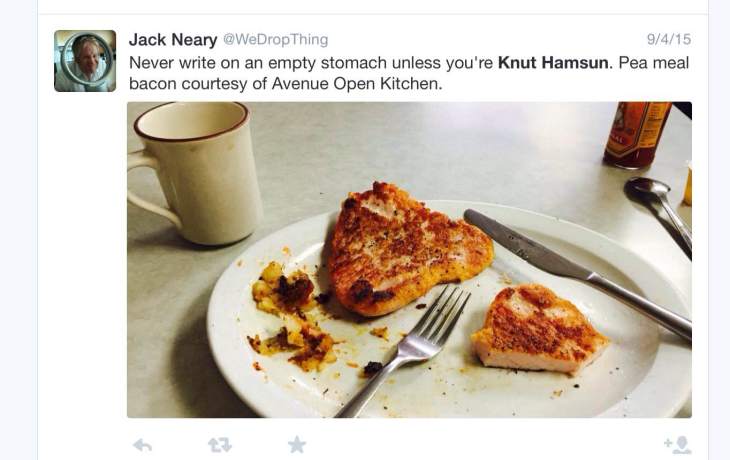 The title of Hamsun’s novel is self-explanatory. But to elaborate, I described the book in my review as a

psychological novel that uses stream of consciousness or interior dialogue to tell the story of an unnamed writer who lives a precarious existence because of his lack of food and other basic comforts.

Having read the book, John Neary knows exactly what happens when you’re hungry but still needed to write.

A preview of the simple, modern language that Hamsun used and how the story unfolds is posted here by one reader. Remember, written in 1890. 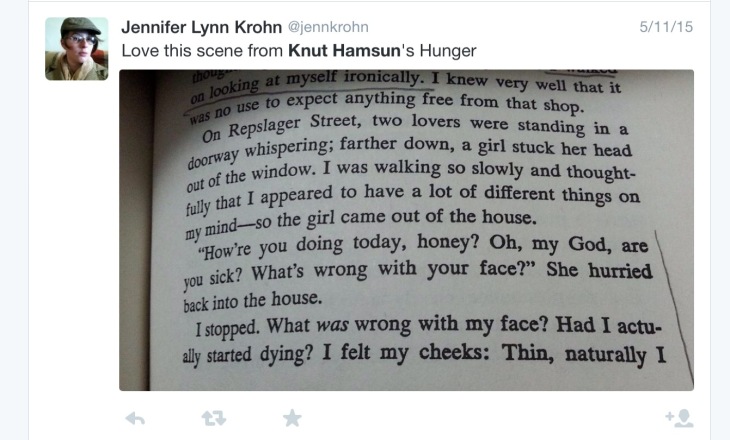 If you read the excerpt above, note that the unnamed writer was walking around when he encountered the girl. That’s his primary occupation—-he wanders around the streets of Christiania (now Oslo, the capital of Norway), with a hungry look on his face. A simple enough story, but as it develops, the character can bring the reader to exhilaration with his musings and irrationality.

Here’s another tweet, a humble brag. Saul Bellow and I are not friends yet, but to be fair, he was awarded the Pulitzer, the Nobel Prize, and the National Medal of Arts. The only difference is that he didn’t write Hunger.

Extreme reader, this one.

Hunger is a dark tale, but I’m amused that this reader thought it funny to be romantic.

Still, others simply raved about the book.

I hope that’s enough introduction. But if you need more, you can read my review of my first reading of Hunger here.

This work is licensed under a Creative Commons Attribution-NonCommercial 4.0 International License.